The snow sure looked like a lot of fun on TV. In person, I imagine it wasn’t quite as “cool.” Nevertheless, the Sooners took care of Business in Morgantown, adding a 28 point win on the road to the resume’. I was particularly impressed with the dominance of the offensive line, allowing us to keep the ball on the ground and only attempt 15 passes. Baker was incredibly accurate in the cold, despite being 9-15. Early on, he had three bad drops. Other than the drops, and a few lackluster drives in the third quarter, the offense performed exceptionally, putting up 56 points on the best defense in the conference.

The defense wasn’t quite as impressive, giving up nearly 600 yards of offense, with almost 400 of that being on the ground. But, though the defense did show cause for concern, some of the second half struggles were at least partially because of Jordan Evans’ injury. As the mike backer, Evans makes all the calls and sets others up to succeed. Losing him hurt for sure. Throughout the night, the Sooners played bend-but-don’t-break defense, surrendering an awful lot of yards, but forcing turnovers and holding the Mountaineers to under 30 points. 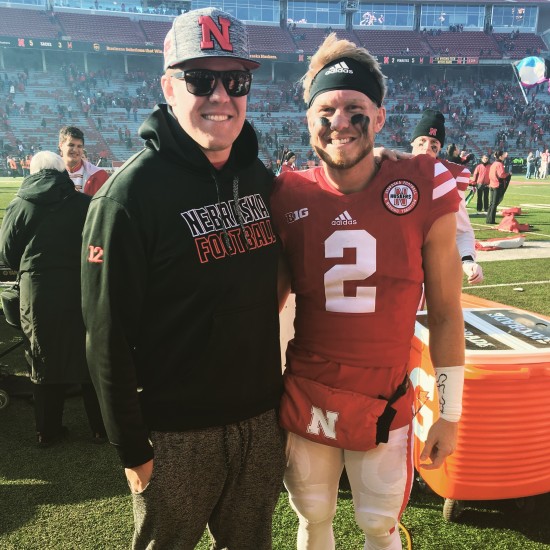 I myself spent my weekend in Lincoln, Nebraska, where my brother plays for the Huskers. I was thoroughly impressed with the Huskers’ facilities, their athletic department, and their fan base. They have an impassioned following that packs out Memorial Stadium each and every Saturday. The facilities that former athletic director Tom Osborne and current AD Shawn Eichorst have built and sustained are the best that I have ever seen.

As for the game, the Huskers dominated the Terps from the start, despite playing without QB Tommy Armstrong. They now move on to face Iowa this week, in a game that could possibly affect the Sooners. Once again, Armstrong is questionable, but now there is a new twist. Ryker Fyfe is also questionable after injuring the wrist on his non-throwing hand. Ironically enough, if Armstrong and Fyfe are unable to go, it could possibly be my brother Zack that gets the nod at QB after switching back to QB from wideout after the accumulation of quarterback injuries. Selfishly, I hope that he gets a shot.

Last week, I wrote about “The Process.” The application point of that story was that the players cannot focus on the end result, but rather focus on what they can control. AKA They can’t pay attention to playoff chatter. But, I am no longer a player, so I am going to prognosticate and scheme and dream up wild scenarios as much as I so desire. So, here are my conclusions about the Sooners’ Path to the Playoff.

We have to be the best 2-loss team.

What does this mean? Who are the teams that I believe would get the nod before us if they have two losses?

All other possible two-loss teams (most likely from either the ACC or Pac-12) would not get a spot before a Big 12 champion Oklahoma squad with “quality losses”, a ton of starpower and momentum, and a dominating brand.

So what do we need to happen?

As I see it, the playoff teams are going to be

So, as a Sooner fan, who do you root for this week?

Michigan State and Washington State! Most likely combo of upsets in my opinion.

Minnesota and Nebraska! This would put Nebraska in the B1G champ as the West rep.

Ohio St! I know there are those that say “Michigan needs to win out”, but I am adamant that we do not want to be compared to a team that soundly beat us at home.

South Carolina! Not likely, but possible. It’s not like Clemson has looked invulnerable.

Let the madness begin! It’s going to be a fun week to watch some college football!